News of recent changes to Individual Income Tax for foreigners in China spread like wildfire over WeChat and other social networks. Numerous amendments regarding the “5-year rule” fueled uncertainty as foreigners were left wondering whether the rule would remain or not. Effective January 1st, 2019, the 5-year rule not only remains but has been increased to 6 years amongst other changes to individual income tax (IIT) law for foreigners in China.

China’s New IIT Law which took effect January 1st, 2019 has specified the definition of Tax resident and Non-tax resident, in line with OECD tax guidelines. Foreigners, including HK, Macau and Taiwan passport holders, who resides in China for cumulative 183 days or longer within a tax year- starting January 1st until Dec 31st – is considered a “Tax Resident” and will be taxed on their worldwide income. Residing in China for less than 183 days over a tax year, he/ she is considered as “Non-TaxResident” and taxed only on the China sourced income. 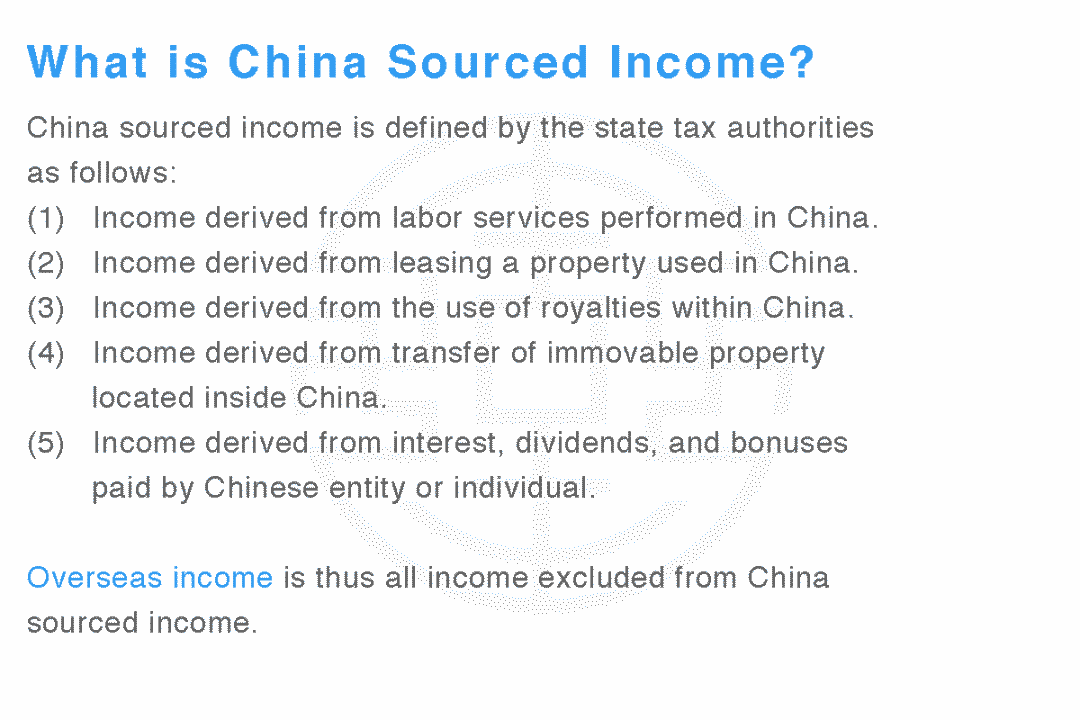 Under old IIT law, the 5-year rule stated that income sourced and paid overseas is exempt from China individual income tax for 5 years, after which it will become taxable in China. A well-known tax concession rule within IIT law has allowed countless foreigners living in China to extend the 5-year tax exemption period repeatedly. If the foreigner leaves China for more than 30 days consecutively or 90 days cumulatively in any tax year during the 5-year period, they “reset” the clock on the 5 years tax exemption period.

Under the new IIT Law, the 5-year tax exemption period is increased to 6-year. If the foreigner leaves China for more than 30 days consecutively in any tax year during a 6-year period, they “reset” the clock on the tax exemption period, and the income sourced and paid overseas is exempt from China individual income tax.

Included in the new IIT law effective January 1st, 2019, are the same tax exceptions for non-tax residents working in China as before. Foreigners who come to China to work for a period of fewer than 90 days cumulatively in a tax year can have their China sourced income exempt from China individual income tax as long as the income is paid overseas.

Below is a chart of how tax liability is recognized under the China New IIT Law;

The new IIT law in China also introduced comprehensive income tax filing. Remuneration of services, income from royalties, and authors’ remuneration are no longer taxed at separate special tax rates and will no be subject to the same progressive income tax rate applied to wages and salary. China tax residents must now file a provisional monthly tax return in addition to an annual tax reconciliation return between March 1st to June 30th of the following year based on the comprehensive income. Non-tax residents must file tax returns on a monthly basis or on each occurrence.

Since 1994, foreigners in China have enjoyed preferential tax policies in the form of non-taxable allowances (e.g. housing allowance, meal allowance, education allowance, home-country visits etc.) without an official ceiling to the amount which can be deducted. They often make up between 40% to 50% (or even higher) of compensation packages for foreigners living and working in China allowing foreigners to significantly reduce their tax liability.

Beginning on January 1st, 2019, these preferential tax policies will be transitioned out over a period of 3 years (ending on December 31st, 2021) and be replaced with a single tax policy for both foreigners and locals. This single tax policy includes 6 itemized deductions based on standard deduction amounts.

Starting on January 1st, 2019, foreigners working in China can choose whether they want to utilize the new itemized deduction policy or to continue enjoying the preferential tax policy currently provided to them until December 31st, 2021. If the foreigner chooses to apply early for the new itemized deduction policy, they will be unable to transition back to the old policy within a tax year.

Megi is Asia's own cloud accounting software. It's crafted with care for China-centric businesses and packed with features specific to China's business conditions.